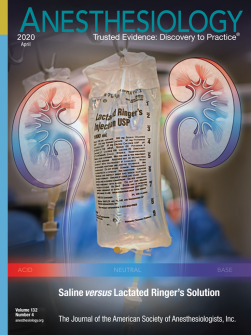 The SOLAR trial, which compared a composite outcomes in perioperative colorectal or orthopaedic patients, assigned to Lactated Ringers’ (similar to Hartmann’s) solution – over 2 week blocks over a few years (8,616), has been published this month in Anesthesiology. The median volume of fluid administered in the perioperative period was 1.9L, and, no surprise here – there was no difference in outcomes.

Here is the blurb from the abstract:

The two litres of Saline / LR did not cause acidosis or meaningful increase in plasma chloride concentrations at 24 hours – chloride rose in both groups initially and then fell off. If the median volume of fluid was 2L – then there was a median difference in chloride intake of 80mmol – roughly what is in half a litre of saline. There is good reason to believe that hyperchloraemic fluids (such as LR and Saline) in lowish volume (2L) don’t change acid base status, due to dilution of albumin and then clearance.  It would have been really helpful to know what, if any, iv fluid was given post op and how much sodium and chloride the patients received over the 3 days of the stress response.

These results differ from the SMART-MED and SALT-ED trials – which despite extraordinarily small volumes of fluid, purported to show an increase in complications – particularly renal with saline. Presumably, critically ill and emergency room patients are at greater risk for organ dysfunction, and the additional sodium and chloride pushed a few “over the edge.”

An impressive study that shows that any anaesthesia department can do important research just by altering one component of “what we always do” every couple of weeks and then looking at outcomes from a largish cohort. It won’t change my practice, and I would dearly have liked to see the study done with plasmalyte-148 rather than LR.

Pat Neligan lives and works in Galway, Ireland
View all posts by Pat Neligan »
« We’re Back